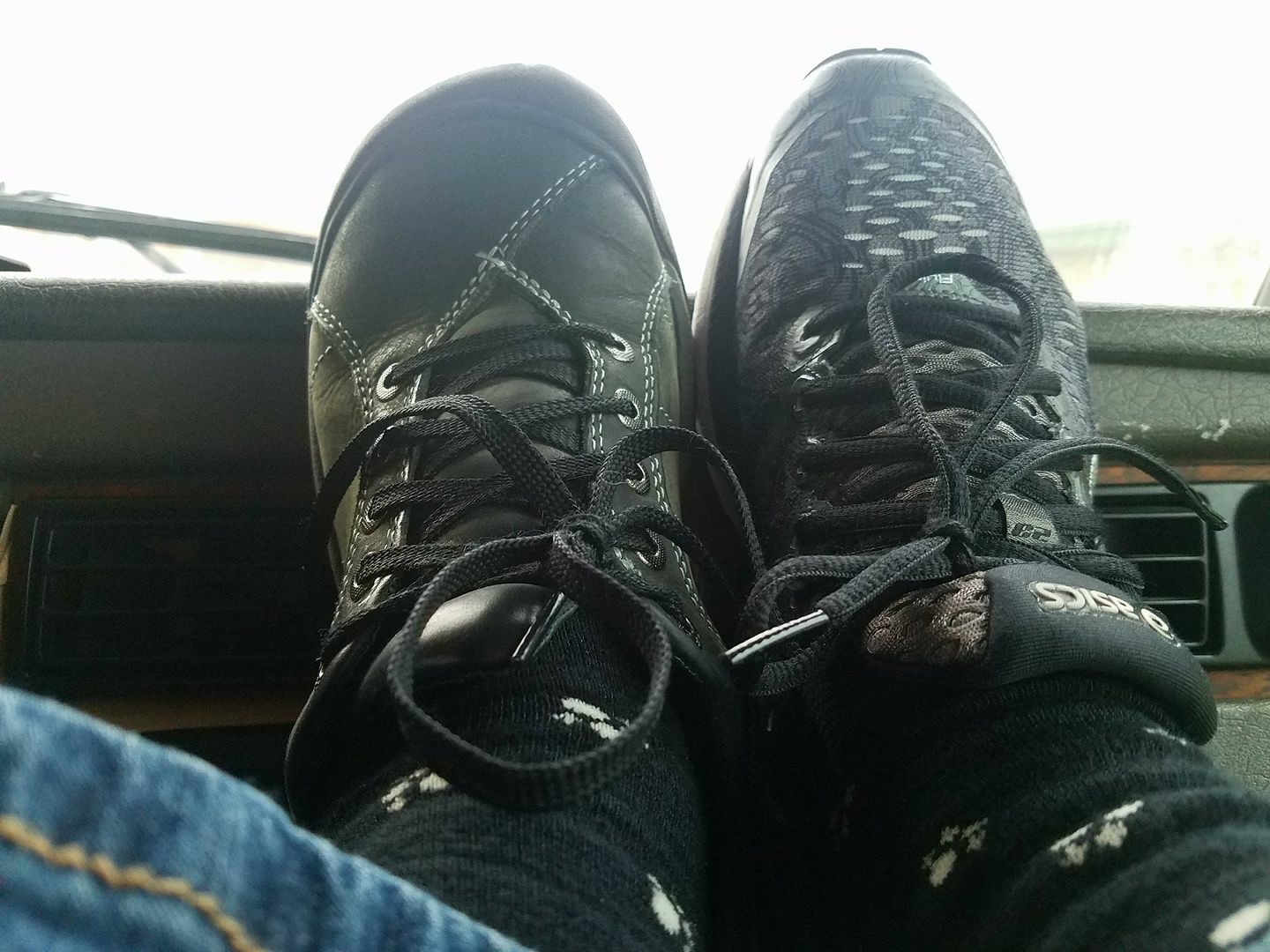 Laughter is a holy thing. It is sacred as music and silence and solemnity, maybe more sacred. Laughter is like a prayer, like a bridge over which creatures tiptoe to meet each other. Laughter is like mercy; it heals. When you can laugh at yourself, you are free.    Ted Loder

I saw this picture posted by my friend, Michelle, early this morning. I knew exactly what had happened before I read her story.

Getting dressed in the dim early morning light and in a rush, she had grabbed her shoes, laced them up, and headed out the door. It wasn’t until later when she was getting out of the car, she realized the shoes she’d put on earlier did not match.

Being the quick comedian she is, she commented, “And I have another pair just like them at home.”

I recognized her sleepy error as did several others who commented, each telling their own stories, extending a welcome to the “Mismatched Shoe Club.”

Years ago, I had the same experience. I was working at Children’s Hospital in Denver. It was summer and we were very busy. We had lost one sonographer and my remaining co-worker, who had called in sick earlier, had just quit. No notice. She was done and would not be returning.

My only hope rested on one person. Ole. I did not know him well but knew he was an amazing sonographer. He was hired to do research–a position that was constantly changing and busy. Factor into that, our boss was often unrealistic and always protective of Ole’s time. I could not imagine how he could help me.

Michael had the wine was waiting for me when I walked through my front door. Thank heavens he was home to give me support and suggestions. This was not an unusual dilemma for us–he was used to helping me cope with work problems. I’d done it before–I’d put my bravest face on and make it work.

My night was a restless one, filled with more worry than sleep. I woke early, dressed in the dark so I would not wake up Michael, and headed downtown. As I walked from the car to the hospital, my feet felt so odd. Why did it feel like I was limping?

All kinds of scary things flashed through my mind before I thought to actually look at my feet.

To my surprise and embarrassment, I saw one square-toed, low heeled navy flat and one round-toed navy lower heeled flat. I burst out laughing. As stood waiting to cross the street, I laughed until I cried.

I was obviously not as calm, cool, and collected as I thought I was.

When I walked into the office, I saw Ole was already there, motioning for me to come talk with him. Oh man. I was so self-conscious about my shoes. I had to find a way to tell him about my mistake before he noticed.

As I walked towards him, he looked down at my feet. In that nanosecond, I could see he was trying to figure out why I was walking so funny.  As his gaze took in my strange choice of footwear, our eyes met and we connected on a level we never would have without those mismatched shoes. He knew and I knew he knew how not okay I really was. Suddenly, we were both bent over with laughter, tears streaming down our faces. A hug naturally followed as he began to tell me how he could and would help.

Laugher was not only the best medicine but it formed a solid platform for a friendship that remains very special. My subconscious mistake provided that connection as well as being a message for me to lighten up. By opening up, sharing my fears, and laughing at myself, others found ways to help.

I don’t know the cause of Michelle’s shoe mishap. Whatever it is, I hope it gave her a way to share the medicine of laughter today. I love you, Michelle. God bless you.

“Laughter is wine for the soul – laughter soft, or loud and deep, tinged through with seriousness – the hilarious declaration made by man that life is worth living.”
― Seán O’Casey