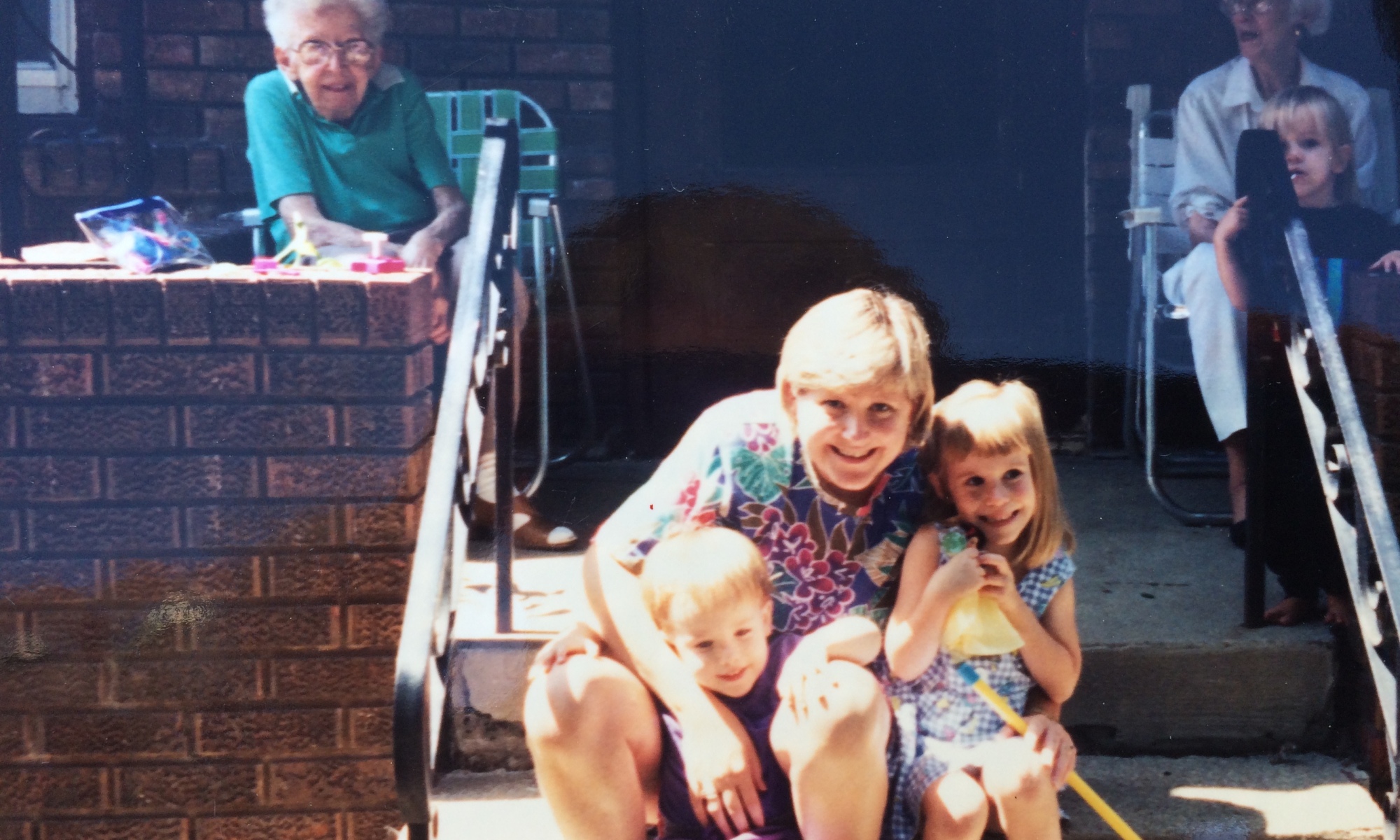 I love September. It is the beginning of Fall and a month filled with family birthdays.

September 3 was my Aunt Marie’s birthday–at least that is the day we all believe to be her birthday.

Happy birthday, Marie. As usual, I am a few days late–which would be no surprise to Marie. This is the only picture I have of her. Marie is on the left. Her sister, Eve, on the right. My sister, Susan, and her two kids, Matt and Ashley are in the foreground. Of all the pictures I have saved through the different moves, this is one of my most treasured.

Marie was my Mom’s aunt and a nurse who took care of everyone in the McDonald family. At that time, the McDonald family was huge and scattered all over the country. Marie told me that her brothers and sisters never saw each other unless someone was sick or dying. Until Mom got sick, I never knew Marie or any of the extended McDonald family existed.

Mom’s illness started out innocently. Well, at least in my kid’s memory, that’s what I thought. It began about a month after the birth and death of my brother, Richard. I remember the details of those few days so well–I wonder if I subconsciously knew something was wrong.

Things were quiet as Mom recovered from the C-section she had with my brother. It was late summer and school was getting ready to start. I was looking forward to fifth grade, wondering who would be my teacher and what kids would be in my class. I heard Mom call me into the living room. She asked me to come look at the back of her neck. Could I see and feel a lump? Even my nine-year old self could see and feel that large lump. As I told her, the look in her eyes was my first experience of seeing fear. The question she asked next caught me off guard. She asked if I would go with her to the doctor’s office instead of going to the pool. I said sure. Not that I was giving up my favorite thing.  My motivation was I knew the waiting room had good things to read. I’d skip the pool if I could read adult-like stories and the jokes I knew were in Reader’s Digest!

Looking back, my adult eyes see things so differently. She must have been so afraid of what was coming next. She had just gone through a very difficult pregnancy and lost her son. She was still grieving this loss. What will happen to her three young daughters?

Looking back, I wonder why she asked me to go to the doctor with her and not my Dad? Looking back…I question many things.

We went to see the good doctor that afternoon. The little room was warm and stuffy as we waited with several other people, many sharing their stories about why they were there. HIPPA was far in the future and people shared more than even a kid really wanted to know. I was immersed in the Reader’s Digest joke section as my Mom waited. Silently. I sat close to her and she would hold my hand. Being there with her made me feel important. When she held my hand, I knew it was going to be okay.

She went back alone when Florence, the office nurse, called her name. As we left the office, the look I had seen earlier was back even as she forced a smile. She and Dr. Dalby had made plans and they were starting immediately.

This was the early 60’s and there was not a lot of hope when the word cancer was used. Mom went to the hospital and the biopsy came back as cancer. At the request of Aunt Marie and the McDonald family, Dad took her to Mayo for a second opinion. Mayo doctors confirmed and their prognosis was poor. All doctors suggested radiation so she had her series of treatments. In one of my life’s many twists and turns, I would find myself years later in that same room. I  would be a student in a radiologic technology program, doing a radiation therapy rotation at the same place she had her treatments. I don’t remember a lot about that rotation except the sound of the lock on the door when the Cobalt 60 treatment started. That heavy clunk sound still haunts me. That must have made her feel very alone.

Around Christmas, she began having severe headaches. I, too, started having migraine headaches at the same time. Mine would eventually pass. Mom’s headaches got worse. The first part of January, she and Dad went to Mayo for a follow-up visit. The news from Mayo was not good. Her cancer had spread to her brain. Because this was so serious, Mom asked Marie to come be with her. Marie arrived as soon as she could get there so Dad could come home to the three of us. Her stay seemed like forever. Because Marie would be coming home with Mom, they discharged her early. On February 14th, the anniversary date of her marriage to Dad, she came home. In my romantic young girl mind, that was perfect.

Looking back, I think it was just more irony for my parents to bear.

Mom began radiation treatments to her brain. Radiation is brutal. Her previous treatments and her recent surgery and hospital stay had taken a huge toll on her. After a few sessions, the radiologists determined that it was too much for not enough benefit. The same group of radiologists I would later work for sent a letter stating that–a letter Dad shared with me one late winter afternoon. We had gone to the post office box to get the mail. He handed it to me after he read it. I am not sure why I reacted with the intensity I did. I don’t think I really believed that the doctors couldn’t/wouldn’t fix her. I could not believe that God would take my Mom. I screamed. I cried. I swung my fists out at him. This had to be a mistake. Slowly, I started asking questions and settling down. Only then, after I was calm, did he tell me I could not tell Mom I knew. He had shared this with me against the advice of everyone in the family. I had to act normal.

It was a secret. It was a very heavy one and one I am sure I did not pull off well.

Mom recovered some after stopping radiation. Marie had gone back to Omaha and Dad and I were trying to take care of things.  I was feeling very adult and trying hard but it was obvious we were in an impossible situation. We needed help. Once again, Marie came to the rescue. She arrived just before Mom’s birthday, April 22. Mom passed away August 30. Marie and Mom waged a very hard-fought battle.

Marie cared for mom and stayed on to help our family for nearly two years. I cannot begin to imagine what would have happened to my sisters and me if she had not stayed. Not that I made her life easy–I made it an absolute hell on earth. She was there through all my pre-teen rants and rages. Marie was the only one who understood a young girl grieves the loss of her mother in some strange ways. It must have been the love she had for my Mom that gave her the patience to always try to find some way to break through the shell I had constructed around myself. I was still trying to act and be normal. Through it all, she never gave up on me.

I never thanked her enough. Oh, I went through the motions and said the appropriate words. In my usual very immature adult fashion, I was so busy being busy, I could not and did not take the time to appreciate her. On my list of regrets, this is one of the biggest ones. Now, as an older and hopefully more mature adult, I do realize and understand all the sacrifices she made for all of us.

Thank you, Marie, for giving me the guidance and care that allowed me to be the person I am today. It took decades for me to grow enough to fully appreciate all you gave me. In all the time Marie spent with me, I never told her I loved her. I signed my hastily written cards and notes to her with love–but never said those words to her.

I now know that time stops for no one or for any reason. You can be angry and sad and hurt. Put yourself away long enough to tell those you love that you love them. Just do it.