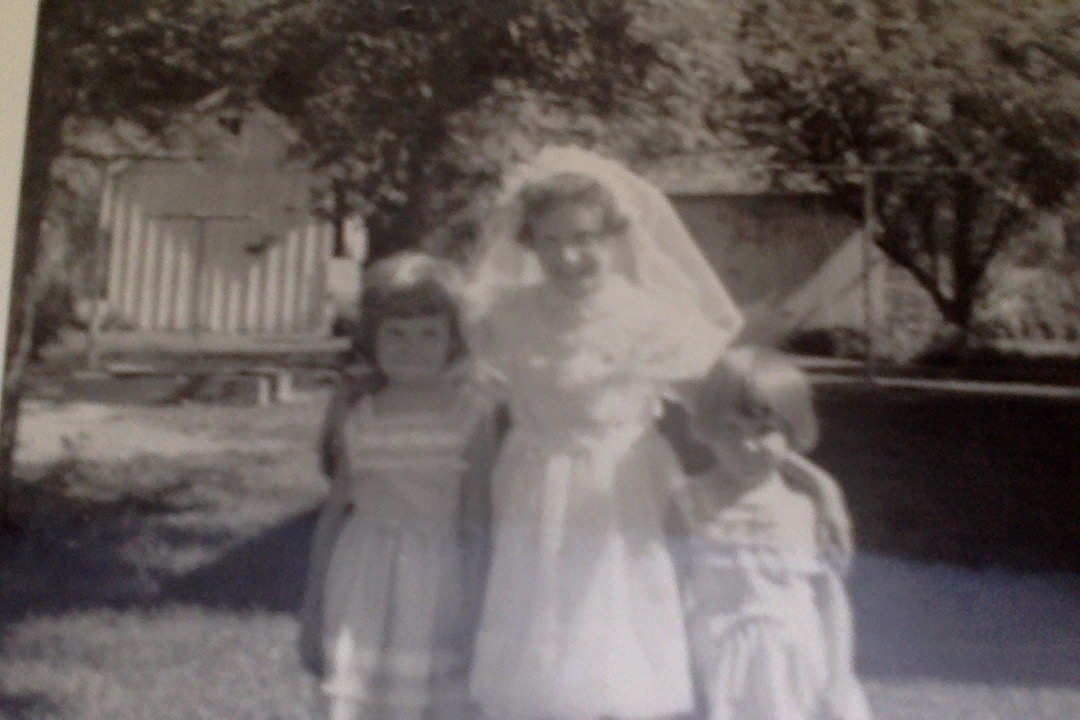 Memories. Lately they have flooded my head. Last night I woke up thinking about my First Confession and First Communion.

I was thrilled to see a picture of my First Communion survived all the moves I’ve made over the years. I’m thinking that in itself qualifies as an honest to God miracle.

This picture was taken at our house on first street in Traer, Iowa. My two sisters are standing with me, Beth on my right and Susan on my left. I was so proud of my beautiful dress, vail, and shoes! I felt like a princess, ruling the day to the max because I was literally the center of attention.

Growing up Catholic is a source of stories for many of us. My first confession was such a serious thing for me. I was going to have to remember all my sins, tell them all to the priest, and then try to not do them again. I agonized over how many times I disobeyed my parents. This was my first confession so this covered a LOT of time. How do you even count that many times? How many times had I been unkind to my sisters? I’m not sure I could even count that high.

Our parish Priest, Father Lana, talked with us that day as we formed a line beside the confessional. Father told us to do our best–that the number of times we sinned was not as important as being truly sorry for them. And, he said, with the grace of God, we needed to work hard so we did not sin again.

Well. That took some of the pressure off. I could ease up on the number deal and concentrate on my future. Still, I was thinking, this is going to be hard.

Father Lana lead our pre-confession prayers. He gave us all a final review as he entered  his side of the confessional. In our little church, there were only two doors, one for the priest, and one for the person making their confession. This was a detail I did not appreciate until I was much older.

The line progressed, each of us making our confession. While we waited I could see that some kids were super fast, others not so fast. This began to bother me. If I said all I had planned, I’d be in there a pretty long time–a lot longer than most of the kids ahead of me. I’d have to talk fast or change my confession. My mind was spinning and it was almost my turn. I could come back, right? If I’d forgotten something, I could say it next time–when there were not all the other kids watching…waiting.

It was my turn. I walked in and knelt before the little screened window. I heard the window open and I was asked if I was ready to make my first confession. I began, as I had practiced, bless me Father, for I have sinned. This is my first confession…

I told Father my sins and all the times I could remember committing them. When I’d been quiet for a few seconds, he asked me if I was done? Had I searched my soul and was this my best confession?  I hesitated. Had I forgotten something obvious? After some thinking, I replied, “Yes, Father.” He gave me my penance, three Hail Marys and three Our Fathers, and told me to say my Act of Contrition.

I completed my prayer. I’d done it! I’d made my first confession. My sins were forgiven. Three Hail Marys and three Our Fathers and that’s it. Much easier than I’d expected.

I thanked him and stood to leave. As I turned I heard Father Lana say, ” That was a very good first confession, Barbara. God bless you.”

My young mind was so surprised. How had he known who I was? I mean, confessions were top-secret. He was sworn to secrecy, right?

Oh, the sweetness of these innocent childhood memories.

I wish you love and God’s blessings.